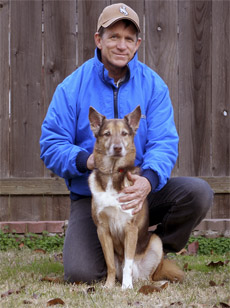 Terrance Emerson is a landscape, nature, and Western Lifestyle photographer and freelance writer based in the Sierra Nevada foothills of California, near the North entrance to Yosemite National Park. His work has been featured in countless venues, from media to print, including magazine and book covers.

Throughout his life he spent most of his free time outdoors, climbing, mountaineering, hiking, hunting, fishing, and sometimes just being out there where the sky meets the horizon, or down in quiet riparian canyons with the trout. Hiking boots. backpacks. four wheel drives, saddles and quarter horses, and dogs too. Wayfaring into the back country of the Great American West. On foot, by vehicle, by pack horse. So nature, landscapes, and images of the Western lifestyle tend to be among his favored subjects.

Growing up in Southern California, he was always escaping up Highway 395 through Bishop to the Eastern Sierra. In one single four week period he logged in more than 8,000 miles through the American West. National Parks, back roads, ghost towns, rodeos, ranches, lakes, rivers and streams. And he did this Summer after Summer. Just to get away and see the places he read about as a child. But for Terry, it’s taken some time to even begin to learn his craft.

He could tell you the story. How his mother gave him a camera when he was eight. How he bought that first Nikon F. And then another. And another. And the lenses, the way so costly lenses. Way back when. But that’s not the whole story.

The story goes more like this. As a younger person, he fell into a pretty good position as a sound recording engineer in the Hollywood Film industry. It’s an easy place to get stuck. Decades of sound stages, locations all over the country, television, feature films, commercials, movie stars, and high pay. Name dropping there would be over the top. He worked right by at least five Academy Award Cinematographers. He worked closely with on-screen personalities who were making a million dollars a week. It’s a fact. He racked up more than 70 top level credits, and hundreds of lower level credits. Watching and listening. Listening for a living. But he was never such a great listener. Just ask his wife. He figured he was good at his career, but sound recording was just going to be more of a means to an end.

So after all those years, he just up and walked away. Moved to the California Central Coast. Went back to his Western roots. Worked on cattle ranches. Took up programming, web design, and Photoshop. Got hired by some well known ground breakers in the digital age. Learned enough to build the very website you’re now viewing from scratch. But it still wasn’t enough. He soon drifted over to the Sierra Nevada range.

And his photography fell into the digital age. Bought that first digital SLR. Then another. And another. And yet another. And the glass again. Four camera bodies in as many years, and ten lenses. The tripods, the ball heads, and the filters. He started filling up hard drives, terabyte after terabyte. Looking for light. But how to pay for all that?

The answer came when he discovered that digital stock media agencies were looking for photographers. It was an open field, but a tough one. So in 2007 Terry set up High Sierra Scenics as a business container. And it allowed a foot into the door to professional photography. It paid for al that gear, for the trips, the MacBooks, the Wide-gamut monitors, and the software. And there was money left over to work toward the Mount Everest of photographic imaging, gallery fine art, and the Holy Grail of stock, in-house usage licensing.

Today he lives on acreage with his wife, three Quarter Horses, three Australian Cattle dogs, three cats, coyotes, and a rattlesnake every now and then. They have a room full of saddles and a studio full of photography equipment. His photography helped to pay for all this, and all this helped him to pursue at least one of the pastimes he loves the most, chasing the light with shutter and glass. But enough about Terry. Just an ordinary fellow looking up to great individuals. The question is what can Terry do for you?

Here are a few of the venues that have published and credited Terrance Emerson.

US News and World Report